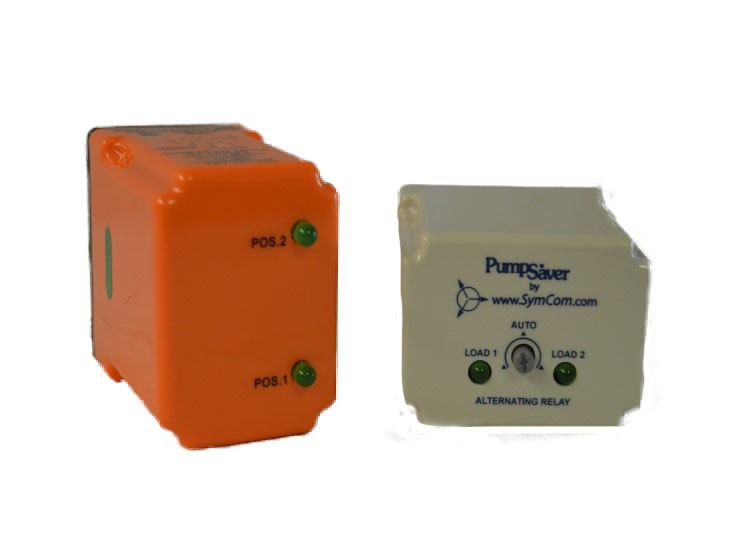 A relay is the most common type of relay. These have 5 pins and a body with two contacts connected to a common terminal. These are wired to be either Normally Open (NO) or Normally Closed (NC.)

The can control two different circuits, one NO and one NC. As the name suggests, it can also switch between these two types depending on your specific needs. No matter what type of circuit (NO, NC, or both), a change-over relay can switch current from one component to another. It is important to note that even though a can switch between the NO and NC circuits, both cannot be on at the same time.

Alternating Relays are used in special applications where the optimization of load usage is required by equalizing the run time of multiple loads.  Identical loads are used for the same job—one or more standby units are available in case the first load fails.  However, an idle load might deteriorate due to lack of use and provide no safety margin.  Alternating relays prevent this by assuring that multiple loads get equal run time.  In addition, there are situations where a need arises to have multiple loads on at the same time for additional capacity if one load cannot keep up with demand.

This alternating action is normally initiated by a control switch such as a float switch or pressure switch.  Each time the initiating switch is opened, turning off a load, the alternating relay will change state, thus alternating the multiple loads.

A control relay is an electrical component that opens or closes a switch in order to allow current to flow through a conducting coil, with the coil not coming into direct contact with the switch. Control relays are electromagnetic devices that typically control the power flow in circuits. Control relays permit a low current circuit to control a high current circuit. Control relays are coils that have electricity sent through them. When electrical current is sent through the coil, the current generates an electromagnetic field that then works to operate the electrical device. Control relays have two methods in which they operate. First, when electrical current flows through a coil, it draws in a magnetic substance that closes the device's switch. When the current stops flowing through the coil, the switch opens. A spring helps in this operation of switches, and electronic circuits are coupled to control relays in order to make devices operate automatically, and the switch is pre-programmed when needed.There are a few different types of relays used in today's electric and electronic applications such as single- and dual-switch relays. As electrical current flows through a coil this behavior creates magnetic poles. These are known, aptly, as North Pole and South Pole. An armature is coupled to a spring inside, to which the poles are attracted. When the current in the coil is at a satisfactory level, the armature remains attracted to the coil. In this situation, the switch stays on, and when the electrical current decreases, the attraction makes the spring pull the armature back, bringing the switch to the off position

Crouzet- -The output relay energizes when the liquid level reaches the high probe. The relay de-energizes when the liquid falls below the low probe. This control can also be used with only two probes by connecting the maximum and common terminals together. The output is energized when the level reaches the low probe. In both functions,if the container is conductive, it may be used as the common probe
in some applications.

Diversified Electronics - Diversified Electronics SPM Series Seal Failure module is a specialized control for monitoring the shaft seals of submersible pump motors. Leaks are detected by sensing the conductivity of the contaminating fluid through probes installed in the seal cavity. When a seal begins to leak, the seal failure module energizes one of its SPST output relays indicating that the seal needs to be
replaced before the motor is damaged. The sensitivity of the probe inputs is field adjustable. When the resistance between one of the probe inputs and the common connection drops below the sensitivity setting,the corresponding output relay and LED are activated.

SymCom-  single or  dual channel, intrinsically safe, LED indication By selecting the proper functionality through the DIP switches, you can define a pump-up or pump-down, single or dual channel non-latching switch. The sensitivity adjustment(4.7k-100kOhms) allows you to define the input impedance at which the output relays (one Form A & one Form C) will change
state, with a debounce time delay of 0.5 or 2 seconds.

SymCom- is an 8-pin plug-in style seal-leak detector to sense seal failures on submersible pumps. A micro controller-based relay that monitors the shaft seal of a submersible pump motor. A resistive probe is installed in the seal cavity. If water leaks into the pump, the resistance measured by the probe decreases. When the resistance drops below the sensitivity setpoint, the unit will trip and the relay contacts will change state. The unit will automatically reset when a fault is cleared.

Who Invented the relay?

In 1809 Samuel Thomas Von Sommerring designed an electrolytic relay as part of his electrochemical telegraph. American  Scientist Joseph Henry is often claimed to have invented the relay in 1835 in order to improve his version of the electrical telegraph developed earlier in 1831.

It is claimed that English inventor Edward Davy "certainly invented the electric relay" in his electric telegraph c.1835.

A simple device, which is now called a relay, was included in the original 1840 telegraph patent of Samuel Morse. The mechanism described acted as a digital amplifier, repeating the telegraph signal, and thus allowing signals to be propagated as far as desired.

« Back to Blog
REQUEST A QUOTE
Copyright © 2022 Custom Control Technologies. All rights reserved.